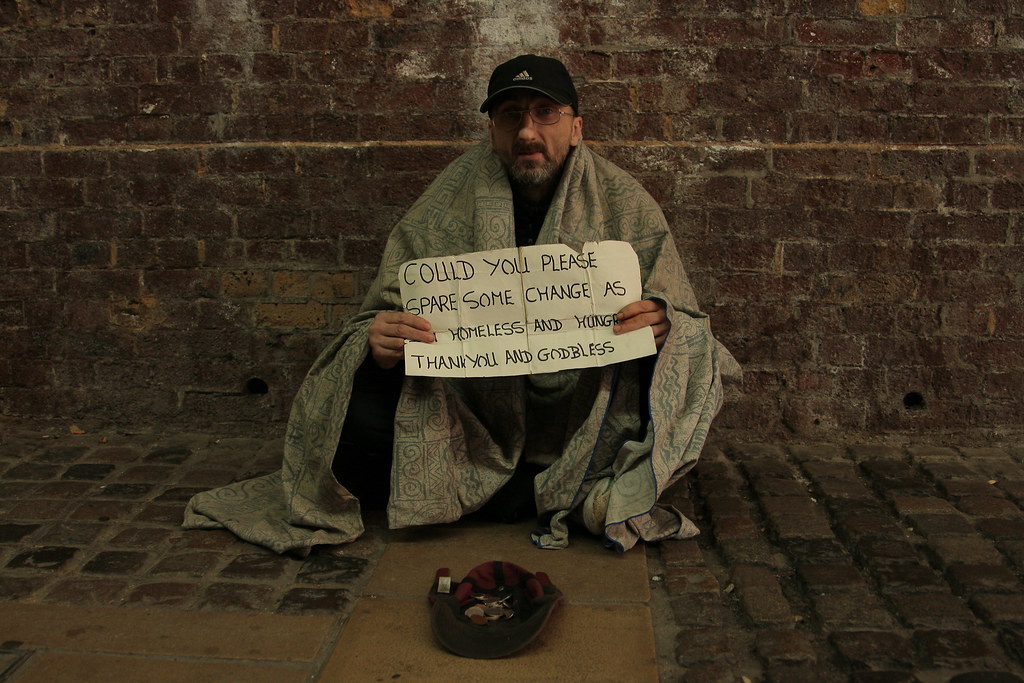 Seven years ago during the Acumen fellowship program, I was challenged to spend a day on the streets of New York trying to better understand the plight of the 59,000+ homeless in New York City. The experience was an exercise in moral imagination, which Jacqueline Novogratz, (Acumen’s Founder & CEO) defines as “having the humility to see the world as it is and the audacity to dream of what it can be.” I was thrust head first into a world that was incredibly uncomfortable, but once I got over myself, I discovered beauty and human connection where I least expected it. I was so moved by the experience that last year, I replicated the exercise, connecting with over 25 different people during the day. On Monday, I resolved to see the streets from a different perspective and so I grabbed a piece of cardboard, wrote out a sign and sat on the sidewalk as a beggar.

As I walked from Penn Station to the corner of W 31st Street and 8th Ave, I was an equal with the people around me, but as soon as I sat down on the sidewalk, I became someone else. The power dynamic was palpable. I was now an outcast and the hundreds of people walking by were in control. Within an arms length was community. People walked by deep in conversation with loved ones. Tourists passed by enjoying the sites. Cabbies scanned the street for fares. I was isolated surrounded by people.

Finally, an African American gentlemen said “God bless you man.” He didn’t stop but the words of encouragement were uplifting nonetheless. A few minutes later, a man placed a $10 bill in my cup and left without a word. I began to gain the courage to lift my eyes and look people in the eye. Most of the passersby looked forward ignoring my very existence, but some would chance a glance and then quickly divert their eyes forward. I now realize why it can be uncomfortable to look a homeless person in the eye, because eye contact connects two people in an intimate way. The eyes truly are a window into the soul.

I skipped breakfast to make the experience a bit more authentic and was incredibly appreciative when a woman gave me a hot bagel with cream cheese and two quarters. This woman did not offer me leftovers; she gave me her very best. A little while later, two guys stopped by and spent several minutes talking to me. I really appreciated them treating me like a fellow human being.

All in all, I spent 105 minutes begging on the street. According to Placemeter, Midtown Manhattan foot traffic can reach 1,200-1,600 people per hour. If we estimate 20 people per minute were passing me on 8th Avenue, a total of 2,100 walked by with only six (0.3%) giving me money and four (0.2%) offering an encouraging word.

I ended my morning on the streets at the Holy Apostles Soup Kitchen, which is the largest soup kitchen in the city. The organization does great work but I couldn’t help but notice that the volunteers did not engage with anyone. While they may have provided for our bodily needs, I can’t help but wonder if they were missing an even greater opportunity to engage in an authentic and personal way. After lunch, I dropped the $14.75 that I had collected over the previous few hours in the donation box and returned to my real life processing the experience. Of course, my morning on the streets is a shallow comparison to what millions of homeless neighbors and beggars endure on a daily basis, but it did offer me a new perspective and appreciation for the isolation many encounter.